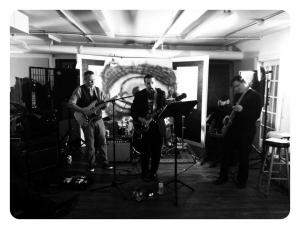 I’ve pulled it off again listeners. Another great interview, despite tripping all over my words. They always say you’re your own worst critic, and as much as I second guess myself, I’d believe it.

Before I introduce today’s episode, I’d just like to thank everyone who came out Monday evening for the show at the Clifton Center. It was a great time, and I hope you enjoyed it as much as I did. I really look forward to similar events in the future. I want to thank again my artists, the Clifton Center, and our awesome tech Adam.

Now, today’s episode! Last week I chatted with local musician Clint Ackerman. He has been playing music the majority of his life; as early as young childhood per the family legends. Clint is a musician that doesn’t let production perfection trump the creative merit of his work. Much of his work is about capturing the energy of a particular moment…the spirit of what he’s going for. His debut album, ‘Failing in Love’, definitely has a very bubbly psychedelic feel akin to the music of the late 60’s. The songs he’s been working on since have been much more varied sonically, and he says his next collection may be much more in the vein of ‘Berlin Trilogy’ era David Bowie. If this proves true, I’ll be eagerly awaiting the release date!

To learn more about Clint’s musically output, you can visit his Facebook page. His album from spring of 2012, ‘Failing in Love’, is available in the iTunes store. Give it a listen!

Catch everyone next week…