It’s the fourth Wednesday of the month listeners! You know what that means….yet another discussion with some creative person or another.

Today you’ll hear a conversation I had with Jim Marlowe, hanging out in his shop Astro Black Records. With Blind Date, I try to be as unbiased as possible, but I have to admit Jim is definitely one of my favorite record slingers. Besides operating a shop with a very special niche, he’s also a generally nice and extremely helpful person. I feel like most times I stop by, I have nothing but questions for him (it seems so appropriate to interview him!). He gave me some pretty vital advice on releasing my own cassette…

Jim also records bands on a budget, host a variety of shows, and creates his own music. He is most notably know for his work in his band Tropical Trash, though he’s also been seen with either his big ole’ saxophone or guitar with other groups such as Sapat, Juanita, and Venus Trap.

Check out the interview below or wait for your podcast subscription to update, and hear me bring up some of Jim’s musical history with a copy of one of his first releases…among other things. 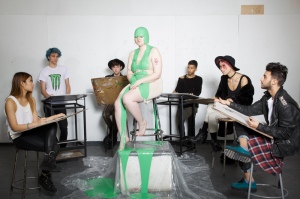 Recently, there was an article in the New Yorker about the influence of Brian Eno. He had this to say of the art schools he studied ‘I thought that art schools should just be places where you thought about creative behavior, whereas they thought an art school was a place where you made painters,”…..

John Waters had this to say of his short stay at New York University, where he was to study film ‘NYU…I was there for about five minutes. I don’t know what I was thinking about. I went to one class and they kept talking about Potemkin and that isn’t what I wanted to talk about. I had just gone to see Olga’s House of Shame. That was what I was more into.’

So, what are your thoughts on art school? Yea? Nay? Great opportunity or financial waste? Do you think people can be taught art? Can a mentor encourage the ‘creative spirit’?

What do you think are the benefits and the pitfalls of such creative institutions?

Be polite, but speak up if you have some thoughts on the matter.

Keep it kind and courteous.

PS. Next week I’ll be giving you guys an actual interview again. This time with local sax blowin’, guitar shreddin’, record store entrepreneur Jim Marlowe. We talk about his creative venture such as Tropical Trash, about Astro Black Records, and music in general. 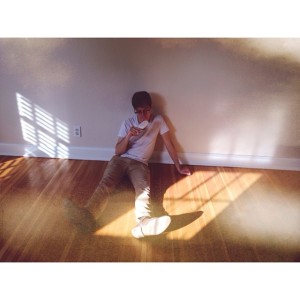 Sarah snapped a pic of me enjoying a much deserved popsicle.

Between all the ruckus of moving & working on my new home, I’ve been doing my best to keep up with the arts.

The Speed Art Museum just hired their new Curator of Contemporary Art, Miranda Lash. This ‘star curator’ (what she was dubbed by folks back when she was with NOMA) Lash will begin her new role at the Speed on Aug. 18. Previous curator, Suzanne Weaver, departed in January and is now an independent curator with the Zephyr Gallery. I’m super excited to see what she brings to the table when the Speed re-opens its doors. It is slated to reopen in spring 2016.

Also, on recommendation, I finally looked into the music of MA Turner. I’m a little ashamed to admit it has taken me this long; I’ve known of his work with his bands Cross and Salad Influence for quite a time. And most of the music sites I frequent mention him often enough. He just released a reconfiguration of the “ZOZ COLLECTION” box set on Vinyl titled ZOZ. Consisting of twelve cassettes cased inside a handmade box, the collection features eighty-three compositions and makes for roughly six hours of sound. Debuting on display at Lexington, Kentucky’s Institute 193 gallery in March of 2014, the boxes as well as tape covers, accompanying booklets and flags have all been hand drawn, screen printed, collaged, painted, and assembled by Turner himself. This is out today on Sophomore Lounge. Sophomore Lounge is a Louisville based record label with releases from many hometown heroes, as well as some of our neighbors. Other artists on SL include Tropical Trash, Phantom Family Halo, and Fielded.

Speaking of music, for those of us music appreciators on a budget, there are lots of options for you this weekend. One such would be Forecastle’s lesser known sister fest, Poorcastle. A bushel of local music for only $ 5. From what I gather, it’s a more down to earth, inexpensive response to Forecastle. This happens both this Saturday and Sunday at Apocalypse Brew Works. For more info, you can see the lineup here. Many Blind Date alumni on the bill.

I’ve heard through the grapevine that Shakespeare in the Park has been great this year. These are free performances in Central Park, each weekend in the summer. This weekend is the performance of Hamlet. I hope to catch it.

There’s much more I would love to mention but I’d be spending all night trying to type it all up.